Mental Factors – 52 are playing vital role with matters when creating this illusion world.  in Pali Language we called them Chethasika.  They are defined as aspects of the mind that apprehend the quality of an object, and that have the ability to color the mind. They have four main unchanged features.

Always keep in mind though we segrate and learn these factors of ultimate realities those are working together and those have very close relationships, especially Consciousness[viññānaya], Mental factors [chethasikas] and Matters[Rupa].

Without Rupa, Vññānaya cannot occur and without viññānaya chethaskika cannot occur.  They are inter dependents and these Viññānaya and Chethasika together called Nama matters called Rupa.  Both together we called them “Namarupa”

Four main features of the Chethasika

Out of these three stages what is the most important one? No doubt, the First one, walking towards wall “A” to “B”. The other two are not much important.   Because, if one is not occurring the other two can not be there at all.
Similarly, we can compare chiththa and chethasika into this example.

The first stage is the Chiththa or Consciousness compare to the walking means you are taking a purpose. The other two are chethsikas which are occuring supporting to that purpose. This way you need to understand the relationship between chiththa and chethasika.

According to their behaviours chethasika segregates in to four main parts.

Now let us try to understand one by one according to there behavioural nature.

Phassa is occurring with the help of three things. Those are
01. The sense organ,
02. object, sound, taste, auder, touch [Gochara Rupa]one at a time and
03. appropriate consciousness.

It is very difficult to explain in words. Because this process time period is very smaller than milliseconds and it is called Kshanaya. While studying further you will be able to understand exactly what is the real roll of Passa.

When the light is available sun rays dropping to  the object and those rays bump with the eye[chakku pasada], it catches the color message of that rays from the sense organ we called Chakku Prasada. At the same time “Chakku vinnana” occurring and bring that message to the heart consciousness. There are 6 places where the consciousness occuring and we called them “bhumi” the mind birth places.  Except heart sensory receptor rest five receptores  taking their specific stimulant matter purposes only.

Only these 6 places are the one’s consciousness birth places. Because of that those are called “Pasada Bhumi”.

Once you completed the 4 ultimate realities then only you can get the exact picture of this process. For the time being just keep this in mind for your awareness.

Relationship Between Consciousness[Chiththa] and Birthplace [Bhumi]

Mind or the Consciousness is one but according to there role it has given 89 or 121 names. Out of those 89 or 121 we are now going to learn only 10 which directly related to 5 sensorial receptors.  By now you already aware that the  Consciousness birth occurring due to one or more of the 6 main causes. Those are
Unwholesome Causes:

But these 10 Consciousnesses  birth happening as a result of previous Karma  without these six Causes.  They are born with their respective Bhumi hence consciousness was named with the birth place.and their particular actions.

Another very important factor which has several Categorizations.  Before moving forward would like to do simple activity.

01. Now will see what Lord Buddha says about the word Feeling called “Vedana”.  Mainly it has three types of Feelings.

These three types of vedana can be found in most of the Sutta deshana.

02. But when it comes to Abhi Dhamma there are 5 Vedana types and those are:

We are not going to learn this indetaile  right now.  But I want you to show the relationship of those factors in several Buddhist teachings.  Hence worthwhile having a brief discussion of this topic. 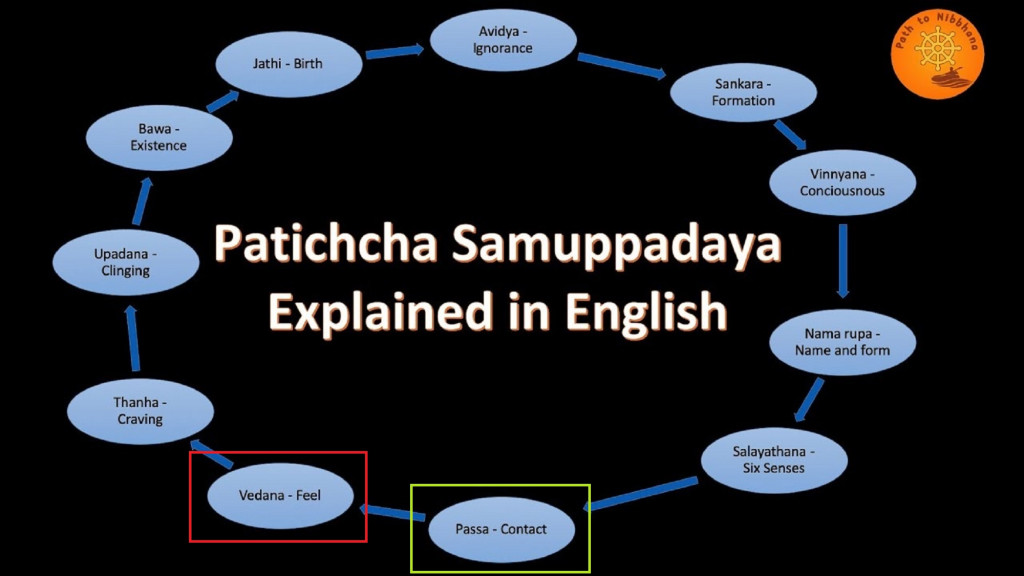 Now let us see how these sensory receptors[Prasada Rupa] and Stimulant Matters[Gochar Rupa] combine with Contact[Passa] occurring Feeling [Vedan].   Explain here one  sensory receptor rest you have to learn in a similar way.  As example we take eye[Chakku] sensory receptor.

Chakkhu is the prasada object that the image touches here.  The eye is mainly divided into two parts. As

The Lord Buddha told us that as long as the creature enjoys the traditional world arising from the delusion of not knowing this objective world wisely, he is engaged in an eternal samsara journey.   Perception is awareness or recognize of an object’s distinctive features. It becomes six-fold in relation to the five physical sense objects (color, sound, smell, taste, touch), and mental objects. It is sañña that enables us to recognize an object previously perceived.

There are four perversions [Vipallaasa] that distort perception The perversions of regarding:

01. What is impermanent[Anichcha] as permanent [Nicca]
02. What is unsatisfactory [Dukkha] as pleasant or happiness-yielding [Sukha]
03. What is without self [Anaththa] as self [Aththa]
04. What is impure [Asubha] as pure [Subha]

These distortions, born of ignorance, increase craving, grasping, and suffering. Only by the practice of mindfulness can one see through these perversions and avoid them.  But to avoid something first we must know that it’s existence.  Without knowing the existence  we cannot avoid.

Memory occurs not through a single factor but through a complex process in which perception plays the most important role.

How the Factors working together

These 52 chethasika’s have there own particular jobs that they are conducting depending on the purpose of the occured consciousness. If it is wholesome act and the consciousness take the same wholesome purpose then of course

Similarly, like in Vedana we take as one of the aggregates Sagna also taking as another aggregate called Sagna Aggregate.  Because Vedana and Sagna both doing a vital role after the Phassa to run the rest of the process of consciousness in that particular purpose.

Rest of the Universal Factors

No products in the cart.